The Mayoral Election Is Coming Up! 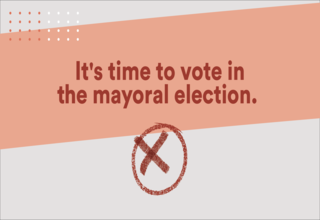 2021 is a big year for this region, as West Yorkshire will elect its first ever Regional Mayor, just like those you might have heard of already in London, Greater Manchester, or the West Midlands.

What is the West Yorkshire Mayor?

West Yorkshire has its own Combined Authority, bringing together Bradford, Calderdale, Kirklees, Leeds and Wakefield, to co-ordinate transport, economic development and regeneration, with a huge investment from central government for at least the next 30 years. The Mayor will take strategic responsibility for this.

Why should I vote?

Voting for the new West Yorkshire Mayor is really important. The kind of work the new West Yorkshire Mayor will do will affect your future, and that of the 2.3 million people who live in the region – looking at development and regeneration providing new jobs across sectors, and making decisions on matters such as housing, transport and infrastructure, health and social care, and education.

You’ll also have seen over the past year, and through the response to Covid and lockdowns, that regional mayors have that kind of ‘soft power’ that can really push for greater investment and policy focus on a particular area. As the UK moves with the ‘levelling up agenda’ and towards creating that Northern Powerhouse, it’s really important that the person leading these discussions from this region is someone you trust to do the best for you.

Anyone who is registered to vote in West Yorkshire is eligible to vote in this Mayoral election. The rules are the same as for Local Elections meaning that, if your home and university addresses are in two different local authority areas, you can legally vote in the local and / or mayoral elections in those two different areas. Home or away – you can still have your say! Logistically, you may want to make sure you have a postal vote for one of them though.

Citizens of the UK, Ireland, the EU and some Commonwealth Countries are able to vote in local elections. You must register to vote before midnight on Monday 19 April, and can do so online at www.gov.uk/register-to-vote.

Who are the candidates?

See our Hustings video here if you're not sure who to vote for.

How do I vote?

You can either vote in person on Thursday 6 May, or by completing a postal vote, if you have already registered for this. You can apply for a postal vote through Kirklees Council: Postal Voting. If you are voting in person, the address where you need to go to complete the ballot paper will be on the polling card you receive in the post once you have registered.

The voting system for the Mayoral Election is slightly different to the usual one for local and general elections, and a little bit more like the one we use at the Students’ Union. This election uses ‘Supplementary Vote’, where you have a first and second preference vote, and the winning candidate has to receive more than 50% of the votes to be elected, eliminating candidates in rounds until someone achieves this figure.